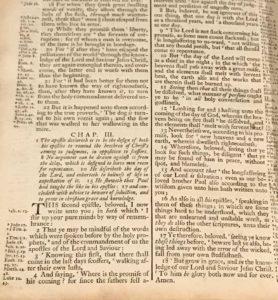 This false teaching claims that Christians today are still under obligation to observe and keep the ancient Jewish Sabbath day of Saturday rest. Legalism (which is an extended variation of the Sabbath keeping false teaching) tries to trap people back under bondage to the entire Mosaic Law of the ancient Hebrews along with required observance of other Jewish customs, food restrictions, feasts, holy days, “traditions,” etc.

Those who preach and teach this false teaching today are called “Sabbatarians,” and beware that they are very smooth and polished in the extreme! The vipers and snakes they are, for they are preaching “another gospel which is not another” – for there is only one gospel and these wolves and vipers should be condemned just like the apostle Paul wrote: “But even if we, or an angel from heaven, should preach to you a gospel contrary to what we have preached to you, he is to be accursed!” (Galatians 1:8). They have all kinds of tricks they use to attempt to justify their false teaching

First, they claim that the seventh day of Creation was a “Sabbath” and that the early saints and patriarchs in Genesis kept the Sabbath also. There is not one single solitary verse or syllable found in the Bible about keeping the Sabbath until it was first introduced, defined and given specifically to Moses and the Jews who were led out of Egypt. It was given specifically to the Jews as a sign of remembrance of God having brought them out of bondage in Egypt (Exodus 31:13, Deuteronomy 5:15).

Next, the teachers of this false doctrine make the claim that Christ did not come to “abolish” this law, so it is therefore still binding on us today. They make this claim while conveniently ignoring the other part of the exact same verse where it also states that Christ “fulfilled” the law for us (because no man could ever do so)!

Even further, the churches, groups and cults who claim to be keeping the “Sabbath” today are doing so in abject hypocrisy and not even doing so in accordance with Old Testament Scripture. They have devised artificial man-made rules and interpretations on how to keep the “Sabbath” today (e.g., the exact starting and ending times, what you may or may not eat, what you may and may not do for work, and even selecting which excuses are allowed for having to work on a Saturday, etc.). The Old Testament penalty for breaking the Sabbath was death; to my knowledge, in true hypocritical fashion, the groups and cults teaching this today have yet to put a single one of their members to death for breaking their make-believe Sabbaths! They do not even keep the Sabbath as it was commanded, and their own hypocritical observance of “Sabbath keeping” proves their own actions and teachings to be false.

And still yet further, in an even more futile attempt to justify their false teachings, these groups then resort to the claim that we are only under the Ten Commandments today (but not the other parts of the Mosaic Law). They claim that “one part (of the law) is sacrificial” and “one part is ceremonial.” This is simply more obfuscation in their pretend justification. Nowhere in Scripture is it specified that there is a distinction between the two, in that an ancient Jew who performed one set of laws didn’t have to perform both sets of laws. They are all part of “the law” as given in the Old Testament. As I mentioned, it is written that if you choose to keep the law, you must keep the entire law – failure to break even the smallest part of the law was equivalent to breaking the entire law! Somehow, this explicit teaching of Scripture also seems to elude the wolves who teach this.

And finally, Sabbatarians claim that it was Roman Catholic Church which changed the Sabbath to Sunday, and that the early church honored the Lord’s Day (which is correctly Sunday) on the Saturday Sabbath. Once again, there is not a shred of biblical or historical support for this.

To top it all off, the groups, cults and ism’s which espouse this false teaching also tend to have many other false teachings as well, such as: believing in “newly inspired” extra-biblical writings by their own sects’ specially “anointed prophets,” commanding you to abstain from certain foods (see the very next false teaching), etc. You cannot get a better example of where you find one false teaching, you will almost always find others with it!

This false teaching was prevalent in the very early days of the church and it is also preached far and wide again today by many so-called “Christian” churches, groups, cults and isms – deceiving millions of people! By accepting and adhering to this false teaching you are re-crucifying Christ! Let me repeat that so it’s crystal clear: In returning to observance of the Mosaic Law (even one little part of it), you are re-nailing Jesus Christ again to the cross by doing so! Furthermore, if you are putting yourself back under even just one single part of the Mosaic Law, you will be back under all of it (see James 2:10), and you must keep it perfectly from birth to death – which no person has ever done nor will ever do, except Jesus Christ Himself! Beware!

Judaism (as defined by the Mosaic Law, with its sacrifices, rituals, traditions, feasts, holidays, etc.) ended at the cross. The Mosaic Law was used to prepare the Jewish people for the coming of the Messiah, and it looked forward to Jesus’ perfect, ultimate and final sacrifice on the cross –it “was a shadow of things to come.” After Christ’s death on the cross (and resurrection), we now live under the Law of Grace, and we are all united as one body of believers in Christ (the Church of Christ). There are no longer any Jews or Gentiles – there are only those who are unified together in Christ and those who are not in Christ (opposed to Him), for it is written:

For there is no distinction between Jew and Greek; for the same Lord is Lord of all, abounding in riches for all who call on Him; for “Whoever will call on the name of the Lord will be saved.” – Romans 10:12-13

For in Christ Jesus neither circumcision nor uncircumcision means anything, but faith working through love. – Galatians 5:6

For He [Jesus] Himself is our peace, who made both groups into one and broke down the barrier of the dividing wall, by abolishing in His flesh the enmity, which is the Law of commandments contained in ordinances, so that in Himself He might make the two into one new man, thus establishing peace, and might reconcile them both in one body to God through the cross, by it having put to death the enmity. – Ephesians 2:14-16

As a consequence of Israel’s rejection of the Messiah, God has replaced physical Israel with a new nation, spiritual Israel. Today, the “Jew” is not one who is so physically, but one who is so inwardly, i.e., spiritually (Rom. 2:28-29).

In this age, those who submit to the gospel plan of redemption—whether Jew or Gentile (Rom. 1:16)—become children of God, and thus are constituted as the true “seed of Abraham” (Gal. 3:26-29).

In effect, Christians are “spiritual Jews,” and the Bible defines the true Jew of today as one who has accepted inwardly (in the heart) the perfect and complete sacrifice of Christ on the cross:

Today, believers in Christ are called “Christians” (and “spiritual” Jews according to Romans 2:28-29). Matthew Henry writes: [3]

The name of God’s chosen shall become a blessing: He shall call his servants by another name. The children of the covenant shall no longer be called Jews, but Christians; and to them, under that name, all the promises and privileges of the new covenant shall be secured. This other name shall be an honorable name; it shall not be confined to one nation, but with it men shall bless themselves in the earth, all the world over. God shall have servants out of all nations who shall all be dignified with this new name.

Furthermore, when Christ said to “keep my commandments,” He is referring to His commands as given in the New Testament books of the Bible, not the Mosaic Law that was specifically given to the ancient Jews under Moses! I cannot stress this strongly enough. Today, we look back at the cross and move forward in compliance with the Son of God’s commandments as given in the New Testament. We are not to return to Old Testament practices or the Mosaic Law or Sabbath Keeping on Saturdays. The book of Galatians (among other Scripture) specifically addresses the issue of returning to Mosaic Law legalism and strongly warns and commands against it (“O foolish Galatians…”).

And while we must strongly rebuke the Sabbath keeping false teaching (and also correctly teach New Testament doctrine), we must also always remember and be thankful that “salvation is from the Jews,” and even further, that our Lord and King was a Jew (the King of the Jews). Wayne Jackson further therefore correctly writes: [4]

No Christian can be anti-Semitic toward the Jews [note: or racist towards anyone in general. Remember that the family of God includes people from every race, tribe and tongue, and they are your brothers and sisters in Christ]. Christ was a Jew, and that by divine intent. In a conversation with a Samaritan woman, Jesus declared: “[S]alvation is from the Jews” (John 4:22). The focus, of course, was upon his personal identity as the Messiah (vv. 25-26). All people are indebted to the Hebrew nation for the Savior.

Christians are to love all people, but that does not mean that they are permitted to ignore history. The Jews have both a positive and negative history concerning Christ. What did Jesus mean by his statement: “[S]alvation is from the Jews”?

The affirmation, “It is from the Jews that salvation proceeds,” stands as an effective answer to the charge of anti-Jewish bias frequently laid against the Evangelist [John] nowadays (Bruce 1983, 110). [5]

Jesus acknowledged his Jewish heritage, and Christians should rejoice in this fact as well.

But never forget that we are today under the stunning grace of Christ, not the Mosaic Law. This Sabbath keeping false teaching leads to death; Christ, and His gospel of grace lead to life. This teaching tramples the Cross of Christ underneath it and leads one back to bondage under the law and death. Even the ancient book The Pilgrim’s Progress warns against turning back to legalism, i.e., the way to death. And yet still, this false teaching is more rampant today than at almost any time in history.